Together In One Voice 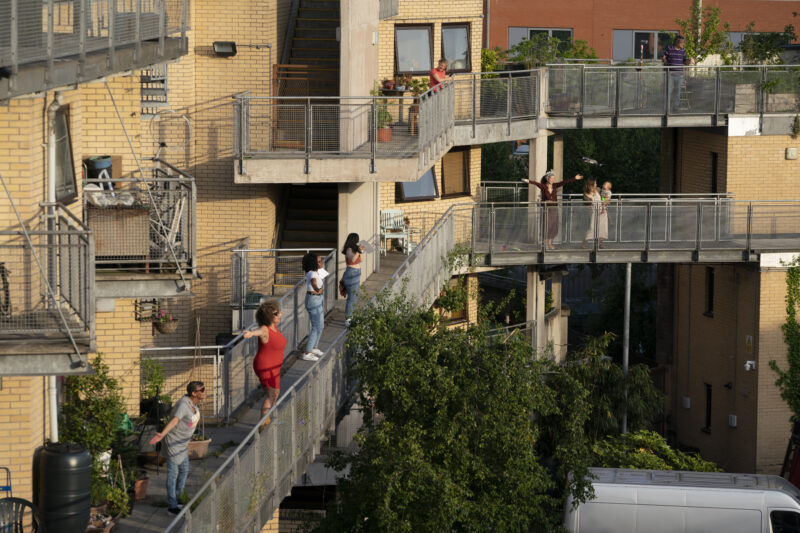 Together In One Voice (Manchester International Festival; Photo – Jon Super)

Together In One Voice was a city-wide, socially-distanced mass community singalong which I produced during the nationwide lockdown of Spring 2020 on behalf of Manchester International Festival.

On Thursday 28 May 2020 thousands of residents from across Greater Manchester threw open their doors and windows and took to their doorsteps and balconies to join friends and neighbours and raise their collective voice in a joyous singalong, supported by a host of top musical talent. The singalong was accompanied by a specially-arranged soundtrack, streamed on the night for people to join in with via MIF LIVE (Manchester International Festival’s online channel), featuring performances by virtual choirs and musicians from across the city which had been specially recorded during lockdown. Liam Gallagher, Mark Owen of Take That, James’ Tim Booth, Emeli Sande, Mike Pickering from M People, Tom Walker and Aitch all appeared on screen on the night, via the live-stream, to introduce the public’s renditions of their songs, and a host of other stars also delivered a series of messages of support ahead of the singing.

The doorstep singalong was captured on the night with drones, street cameras and footage from residents for an extended broadcast featuring interviews with artists and participants which was broadcast on Sunday 31 May, again on MIF Live.

There was wide-ranging press coverage for the event across print, broadcast and online including Sky News, BBC Radio 1, BBC Radio 4, BBC 5 Live, BBC Radio Manchester, Good Morning Britain, Granada Reports, Manchester Evening News plus many titles and websites across Greater Manchester, NME, Metro Newspaper, and a host of pick up in local press across the country. The project had over 740k impressions across social media channels, and during Thursday’s singalong broadcast the hashtag #TogetherInOneVoice was trending No.1 in Manchester, and No.10 in the UK. The two broadcasts received over 55,000 views within the first 4 days following the event and have continued to attract viewers in the weeks following the event.

“What a fantastic night Linden Road, Boothstown, had listening to @togetherMCR! As a road and a community we’ve come together weekly and supported each other and all our neighbours. We practiced all the songs and sang along with the rehearsals in advance, and the night ended with us all listening to the concert through speakers on the street, joining in singing and dancing followed by the weekly clap for keyworkers… We’ve had new sets of neighbours on the street in the last year, and half of us didn’t know each other before this. But now we feel like old friends and there’s a real sense of  community.” Registered Nurse Angela Hutton from Boothstown

“[my grandson] has really enjoyed getting involved with the singing, he’s found singing has given him confidence, opportunities and a new purpose. He’s been able to find motivation during lockdown by focusing his mind on music and it’s taken his mind off the current situation.  He really wanted to get involved with the event, to share in the experience and to feel valued.” Beverley Shepherd

“That was a fantastic way bringing communities together ⁦- we met neighbours who we never knew we had. #TogetherInOneVoice was a night to remember.” Twitter

Together In One Voice was created by Rose Marley and delivered by partners Co-op, Manchester City Council, GMCA and Manchester International Festival (MIF). For more information visit TogetherMCR.com.