← Together In One Voice
A Drunk Pandemic → 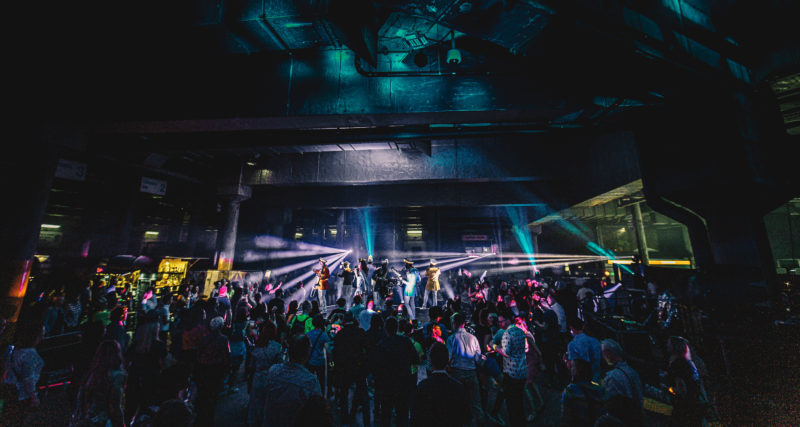 The early 90s were seminal for dance and electronic music and inspired a generation of would-be DJ’s, musicians and ravers. The disused warehouses and open fields of The North were a hot bed of communal dance experiences, fuelled by a hungry, dynamic and radical youth culture. In a time before iPhones, trending and WhatsApp, young people mobilized in their thousands, spontaneously congregating to dance and make memories.

Mr. Wilson’s Second Liners invite audiences on a brassy, nostalgic trip to revisit the rush of old school raving and to pay homage to those diehard days of dance. Promised Land is an adrenalin-fuelled dusk expedition, audaciously disruptive and exhilaratingly secretive. Like the authority-evading ravers of the 90s, ticket holders will be instructed to call a phone number to confirm the party location in advance of the show. They must then navigate their way through the local landscape to an unlikely, secret site for an exclusive party experience. With live music and vocals (alongside the band, Promised Land also features 90s icon, singer Melanie Williams and DJ DR Weevil) and atmospheric lighting, Promised Land is a rose-tinted flashback to a lost euphoric era, empowering audiences to make new connections to dance anthems and to share them with the next generation.

Promised Land was originally commissioned by Durham BRASS and premiered in July 2019 in the loading bay of the Prince Bishops Shopping Centre. I produced the show, working with Event producer Ruby Baker in the final stages of the project as the event date clashed with my pre-existing commitments on the 2019 Manchester International Festival. Following the premiere, I am now working with Mr. Wilson’s Second Liners to explore a future life for the piece, building on the learning and experience of staging the show in Durham.