← Cotton Panic!
Festival in My House → 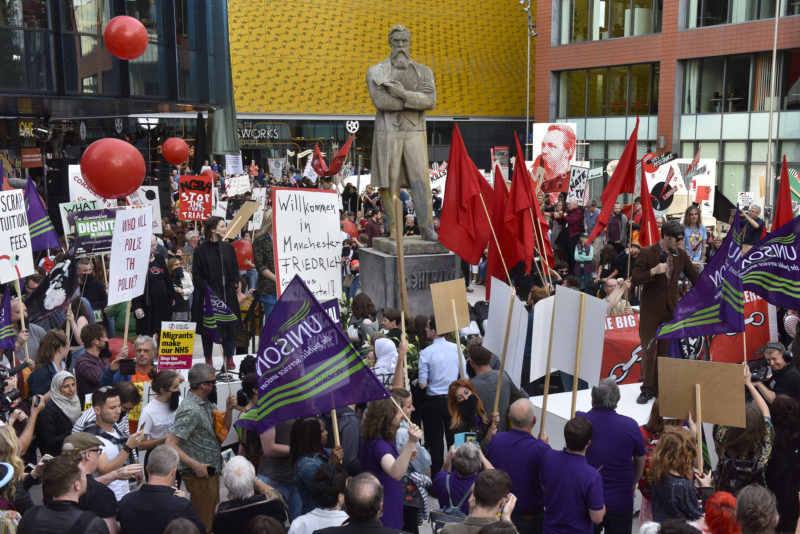 For the closing event of the 2017 Manchester International Festival, Turner Prize-nominated artist Phil Collins returned Friedrich Engels (philosopher, writer, radical thinker) back to the city where he made his name – in the form of a Soviet-era statue, driven across Europe and permanently installed and inaugurated in Tony Wilson Place.

As founders of revolutionary thought, Marx and Engels were often celebrated through monumental statuary in the Eastern Bloc countries. In the decades following the fall of the Berlin wall, these once spectacular symbols of the communist past were steadily decommissioned, removed from the public eye, and relegated to sculpture graveyards from the Baltic to the Black Sea. Following an extensive period of research including time in Russia, Belarus and Lithuania, Phil located a decommissioned socialist statue of Engels in the Ukraine, which he transported to the UK by land and sea, filming its journey along the route. On its arrival into Manchester the statue was installed in a city centre location (one with multiple commercial stakeholders) as a new piece of permanent public art.

Ceremony was a singular moment in the city’s history, reflecting on the conditions of contemporary workers in Manchester and reasserting the city’s crucial role in the history of radical thought. Performers, musicians and the people of Manchester created an extraordinary live film to bring MIF17 to a close, mixing footage from the statue’s journey with live coverage of its inauguration. The welcome celebration also included a soundtrack by Mica Levi and Demdike Stare, a new anthem by Gruff Rhys, and stories of today’s Manchester workers filmed by Collins during his year-long MIF17 residency.

I produced Ceremony on behalf of Manchester International Festival, overseeing the procurement of the statue, it’s journey across Europe to Manchester, its permanent installation, and the inauguration event.